Here you can have a look-see at some of ANABI's media appearances and our pieces. 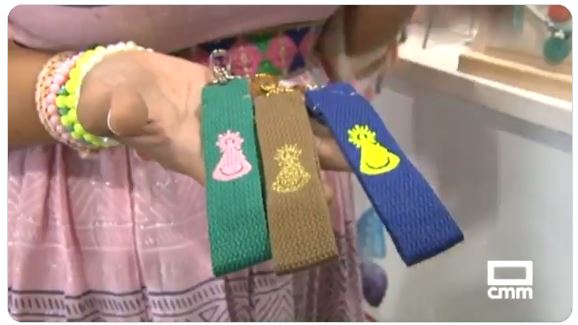 The ANABI Earrings on CCM TV

"The new campaign to support small shops during this Christmas"

Ana Bielsa, entrepeneur from Albacete speaks at the presentation of the Christmas campaign to support small shops .

FEATURE in Vision6 during the fight against COVID19

The story of an Albacete businesswoman in the COVID-19 " trenches"

"Albacete is small city but has a huge heart."

Ana Bielsa, Albacete businesswoman and secretary of the Albacete Federation of Commerce (affiliated to FEDA), has swapped her fashion jewellery design for that of a nursing assistant gown and has offered to work at the Perpetuo Socorro Hospital. Ana Bielsa, the Albacete businesswoman and owner of the Anabi Complementos y Bisutería store, has changed during these days - and for some time to come her career-. As she herself mentioned on her social networks.

Ana receives a special mention from ONDA CERO, which reports that she started as a volunteer health assistant to help COVID patients19

during the 2017 Albacete Fair

ANABI EARRINGS going out for a FEW WINES

Here we have the stunning María García Morcillo wearing this unique Anabi design. So you're saying just a single earring? Yes, just one and that's the charm of the whole look, her pixie haircut and makeup are fabulous with the earring. María is a known, and beloved, journalist from our city, Albacete, who on that day presented and headed the inauguration of a very important project for the Spanish Ministry of Agriculture, the Dcoop- Vinos Baco packaging and bottling plant located in Alcázar de San Juan.

María Ruisánchez, Conexión Asturias TPA reporter wearing one of our gorgeous necklaces in a live broadcast from the El Sablón Beach, Llanes. María is always fabulous with all her looks, we love being part of her accessories collection. ARTICLE in the EL PAIS newspaper with the ANABI BALL RINGS

Our Friend Beatriz Parreño, tea designer, featured in an article in the El País newspaper, wearing Anabi accessories. Our elegant Cypress Earrings and a set of rings interchangeable ball , with colours which were carefully chosen for that occasion

Once again, the great ISASAWEIS has once again shown off our accessories in his beauty tutorials.

The blogger, YouTuber and writer Isasaweis has worn our Rings, both in her day to day activities and in several of her beauty tutorials..